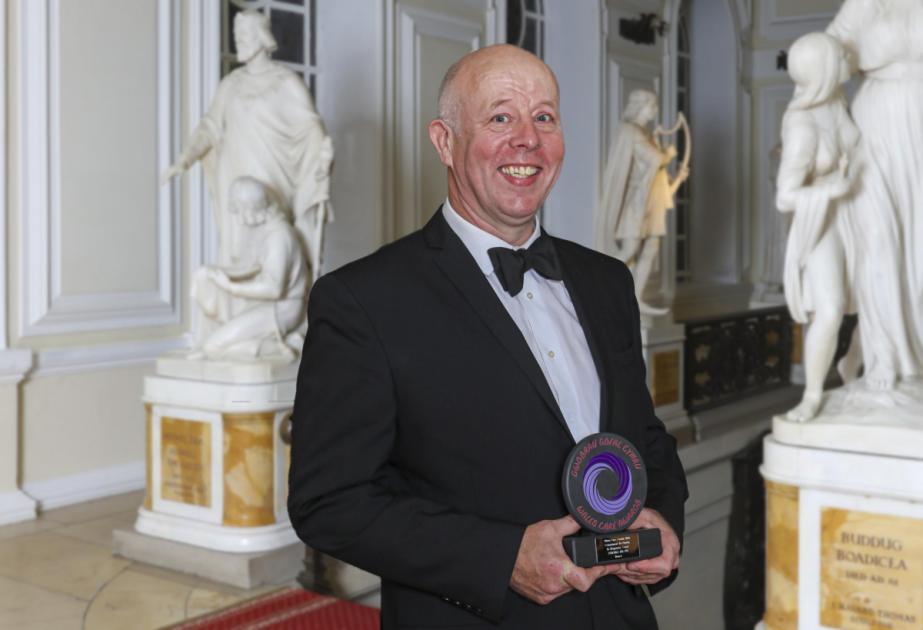 RESIDENTS at an Anglesey care home are raising a toast to a former soldier after he was honoured at the social care Oscars for his tireless efforts to serve them.

Being the barman at the Gwyddfor Residential Home at Bodedern near Holyhead is just one of the myriad tasks carried out each day by Stephen Heath.

He won a bronze in the Commitment To Quality in Hospitality Award category at the Wales Care Awards, dubbed the Academy Awards of social care.

Stephen, from Valley near Holyhead, Anglesey was presented with the Bronze award by Andrea Clever, the chief officer of the Welsh Refugee Council.

Stephen, originally from Shropshire, said: “It means a lot to me but just as much to the residents and staff at Gwyddfor.

“It’s great that Gwyddfor is being recognised in this way. I found it quite unbelievable to be nominated for any kind of award.”

He has worked at Gwyddfor for the past 12 years having first visited as a contractor – he is a qualified plumber – and his talents were quickly spotted by the home’s managers and was asked to join the staff.

Stephen, who served with the Welsh Guards for 16 years, has become qualified in various areas of facilities management since joining the staff at Gwyddfor but continues to use his plumbing skills and the medical training he received in the Army.

He added: “I’ll often be called if there are any out of hours maintenance issues which is never a problem as I’m not too far away and there most days.

“I enjoy working with the residents and getting to know them and their families. I hope they see me as a friendly face who is pleased to see them when they visit.”

He said: “Steve can turn his hand to anything, nothing is too much trouble. If any of our residents have a problem with anything in their rooms then Steve is onto it like there is no tomorrow.

“Health and safety is always paramount to Steve. He is actively involved in all client risk assessments. He is also responsible for implementing several modern technological features to reduce the risk of falls at Gwyddfor.

“He doubles as the Gwyddfor barman at all our functions. He will often be found entertaining the troops via our interactive display or maybe running a team quiz, or simply having a chat with our clientele in the bar.

“Steve has become my right-hand man, I would be lost without him, a fact that I’m constantly reminded of by all our residents and their families.”