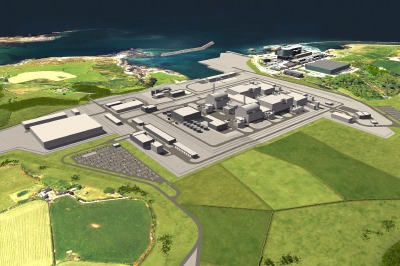 Anglesey’s economic chief has welcomed reports that a US engineering firm is leading a bid to restart the island’s nuclear programme.

Noting that he was “cautiously optimistic,” Cllr Carwyn Jones made the remarks in response to reports in the Financial Times on a joint venture by Westinghouse, Southern Company, and Bechtel in reviving the Wylfa Newydd project.

Slated to create around 1,000 permanent jobs, 2019 saw Hitachi freeze its proposal to build a nuclear power plant near Cemaes last year before pulling the plug completely this past September, blaming a failure to reach a funding deal with the UK Government.

But despite Westinghouse’s AP1000 nuclear power plant design having already successfully completed review by UK regulators, any deal is likely to depend on the government developing a new funding model for large-scale nuclear projects.

He added: “I’m pleased that there is interest from the US and that the consortium are holding talks with the UK Government. If these talks remain positive, this could provide a credible means of reviving the Wylfa Newydd project to generate economic and environmental benefits.

“Anglesey, of course, had a constructive and positive working relationship with Horizon Nuclear Power as well as its parent company Hitachi.

“Whilst in operation, Horizon built a strong and principled relationship with both the county council, and more importantly, the local community.

“It was keenly aware of local expectations and concerns – and we would certainly want to see this retained and embedded in any new consortium taking this hugely important socio-economic project forward.”

He concluded: “Wylfa Newydd is one of the best sites for new nuclear development in Europe and its future development has the potential to bring huge economic rewards and job opportunities for our young people over the next 60 years.

“The project also remains an integral part of the County Council’s Energy Island vision which would put Anglesey at the forefront of low carbon energy research and development, production and servicing.

“The economic benefits would extend across the island, north Wales region and beyond.”

A spokesperson for Horizon Nuclear Power said: “Given the benefits and maturity of Wylfa Newydd, there has been significant interest from third parties in working with us to take our project forward.

“We said we would co-ordinate proactively with other parties and the UK Government on how we can continue to progress development and now that is happening.

“We can’t comment on the specifics of these discussions but our sites are highly attractive for nuclear new build and, as the project’s developer and future operator, we have an enormous knowledge bank of what is required to do this successfully.

“Nuclear is critical to the country’s climate goals and is capable of bringing transformative economic benefits to regions of the country that need them most.

“We’re working hard to ensure that Horizon and Wylfa Newydd continue to be at the heart of this effort.”

A PARTNERSHIP project to restore the Anglesey Fens nature reserves is showing great signs of success, with rare wildlife returning to make their homes on the landscape. North Wales Chronicle | Anglesey …

FOLLOWING the announcement that the Hawk T1 aircraft is to be taken out of service next year, the Unite trade union has been campaigning for the Red Arrow maintenance, conversion and spares for repairs work to continue to be based at RAF Valley. North Wales Chronicle | Anglesey …

YNYS Môn MP Virginia Crosbie has championed levelling up, new nuclear at Wylfa Newydd and a freeport on the island in a series of major engagements at the Conservative Party Conference in Manchester. North Wales Chronicle | Anglesey …