Beaumaris Castle, located in the town of the same name on the Isle of Anglesey in Wales, was built as part of Edward I's campaign to conquer the north of Wales after 1282. 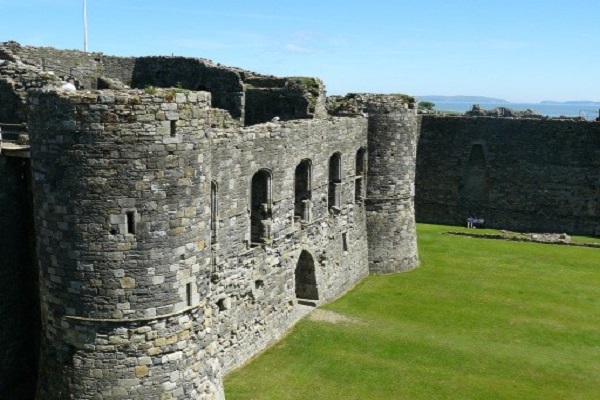 Technically perfect and constructed according to an ingenious ‘walls within walls’ plan, Beaumaris Castle was the 13th-century hi-tech equivalent of a spaceship landing unceremoniously on Anglesey today.
It was built as one of the 'iron ring' of North Wales castles by the English monarch Edward I, to stamp his authority on the Welsh. But it was never finished money and supplies ran out before the fortifications reached their full height.

Beaumaris is nonetheless an awesome sight, regarded by many as the finest of all the great Edwardian castles in Wales. Begun in 1295, it was also the last. The king's military architect, the brilliant James of St George, brought all his experience and inspiration to bear when building this castle, the biggest and most ambitious venture he ever undertook.

In pure architectural terms Beaumaris, the most technically perfect castle in Britain, has few equals. Its ingenious and perfectly symmetrical concentric 'walls within walls' design, involving no less than four successive lines of fortifications, was state of the art for the late 13th century.

From the outside, Beaumaris appears almost handsome. It does not rear up menacingly like other fortresses but sits contentedly in a scenic setting overlooking mountains and the sea, partially surrounded by a water filled moat.

The gate next-the-sea entrance protected the tidal dock which allowed supply ships to sail right up to the castle. Beaumaris is endlessly fascinating. There is so much to see here, the 14 separate major obstacles that any attacker would have to overcome, the hundreds of cleverly sited arrow-slits, the deadly use of 'murder holes' to defend entrances.