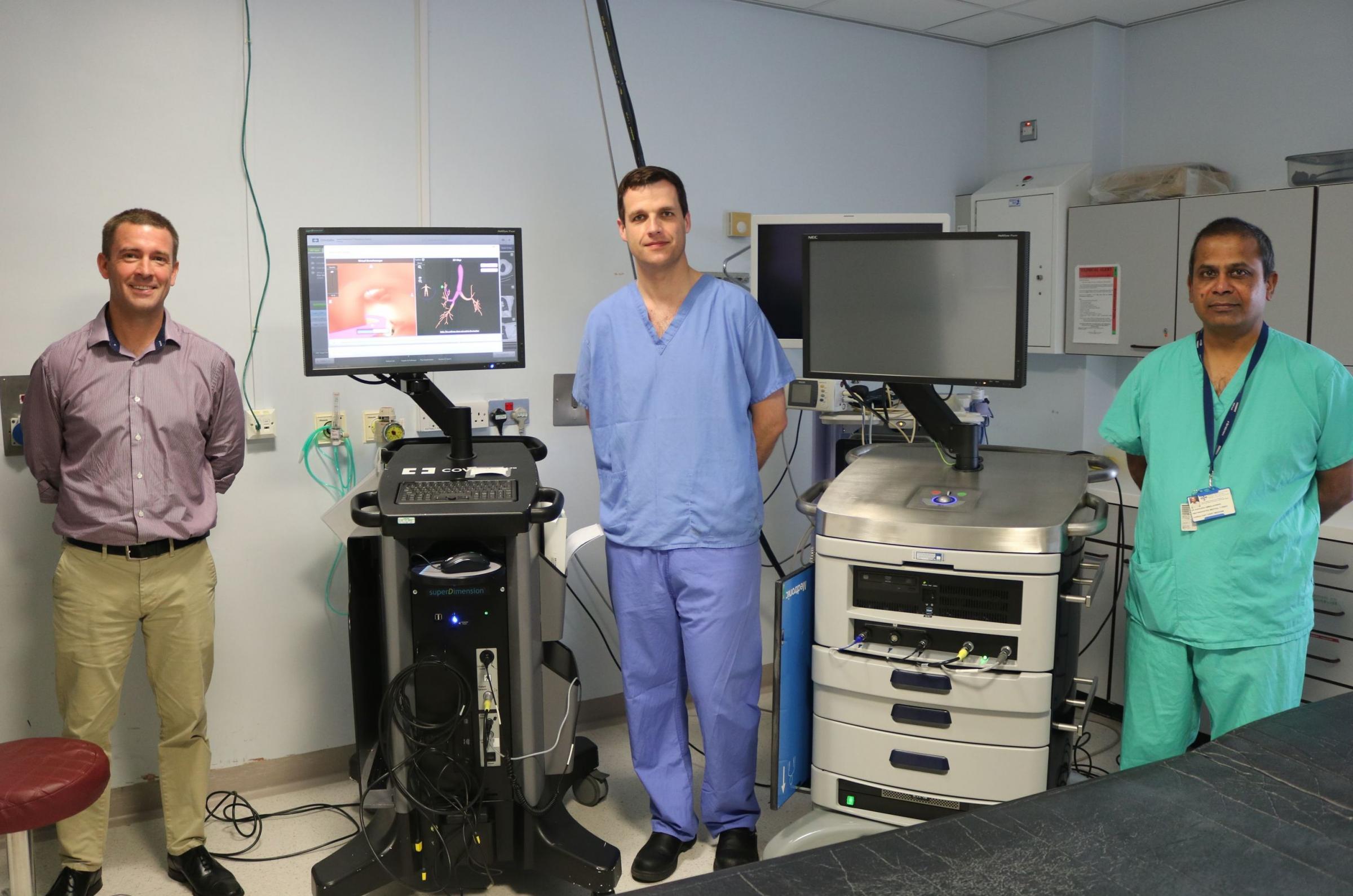 NEW technology capable of detecting lung cancer in its early stages is now available for patients across North Wales.

Electromagnetic Navigation Bronchoscopy (ENB) uses GPS like technology to create a 3D map of the lungs. This map then helps doctors guide a catheter through the lungs’ most complex airways.

Glan Clwyd Hospital is the first district general hospital in Wales, and only second in the UK to use the Illumisite Navigation system by Medtronic.

Dr Daniel Menzies, consultant in respiratory medicine, said: “Up until now it has been difficult to get an early diagnosis, sometimes because of the location of the cancer in the patient’s chest. With this new piece of equipment, it can detect lung cancer in its early stages, sometimes before other symptoms have become evident.

“This means there is potential for earlier treatment and a good outcome for the patient.”

One patient who has already benefited from this new technology is Ann Bedford, of Holyhead, who was offered this procedure during a trial last year.

The 74-year-old was first diagnosed with lung cancer three years ago in her left lung, and last year discovered the cancer had returned.

She said: “When I was first diagnosed with lung cancer I had to undergo surgery and chemotherapy.

“Last year I went back into hospital after I became unwell and following some tests I was referred to Glan Clwyd Hospital where I was offered this new procedure.

“This diagnosed the second cancer in my right lung so much quicker and the procedure was much less invasive – the staff were fantastic and explained the process very clearly to me.

“As the cancer was found early it gave me options on what treatment I could have and I now only need a short course of radiotherapy.

“It’s amazing the advances in technology we now have – this will help so many people in North Wales.”

The technology, worth £130,000, has been funded by the generous donations of patients and the community through NHS’ North Wales charity, Awyr Las.

Dr Robin Poyner, consultant in respiratory medicine, said: “We are very grateful to Awyr Las for their support in purchasing the ENB equipment we need to further enhance our service.

“By introducing this new service it will also bring waiting times down for CT guided lung biopsies and reduce the number of CT scan follow ups, which will be hugely beneficial for our patients.

“Most patients who have ENB treatment can go home on the same day so this is a major advancement in technology for us, and will lead to a significant improvement in cancer care in North Wales.”

Kirsty Thomson, Head of Fundraising for Betsi Cadwaladr University Health Board, said: “This is an excellent example of how donations to our healthcare services are helping frontline staff to lead the way in providing new and innovative treatment.

“This equipment was funded thanks to hundreds of generous donations from local people that wanted to give back to say thank you, or that chose to give to help ensure patients here in North Wales can receive the very best care.

“We are all hugely grateful to the fundraisers that have made this possible.”