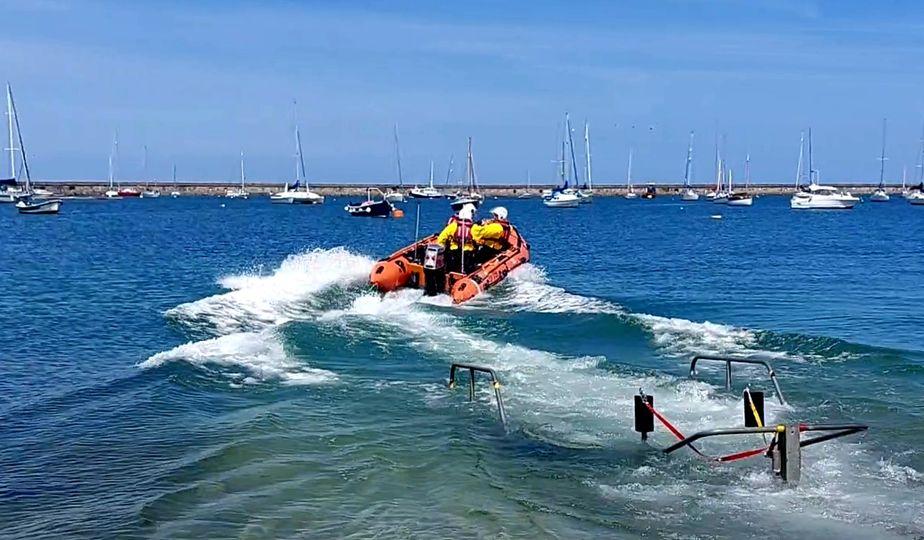 Just after 1.30pm on Saturday, the D-class lifeboat was called to a location just past Holyhead Breakwater.

A speedboat, an 18-ft dory, was circling at speed near the two casualties, one male and one female, who were in the water.

The Holyhead volunteer coastguard team had been called, and were monitoring the scene from the breakwater.

The inshore lifeboat Mary and Archie Hooper launched and headed to the scene.

Both the man and woman had been taken aboard a nearby vessel for safety.

Both were assessed by a casualty care-trained volunteer lifeboat crewman.

The male casualty was in considerable pain, and the launch of the all-weather lifeboat, which carries pain relief and other casualty care equipment, was requested to assist.

Both casualties were taken aboard to be treated.

The male casualty had lacerations to his upper right leg, and had a suspected broken lower leg. He was given pain relief, and his wounds were dressed by another trained lifeboat crew member.

The out-of-control vessel seemed to be running out of fuel, so it was possible for an RNLI crewman to get aboard safely and activate the kill cord.

Both the man and woman were monitored by crew as the lifeboat headed back to to Holyhead lifeboat station to await an ambulance.

North Wales Ambulance attended shortly before 4pm, and the male casualty was taken to Ysbyty Gwynedd to be fully assessed and treated.

Holyhead lifeboat coxswain Tony Price said: “The couple had been unlucky; they had owned the boat for some time, and it seemed that a steering failure as the boat increased speed had caused the boat to veer out of control, throw the two occupants against the craft’s upper steel work and top sides, and then throw them overboard.

“Luckily a nearby good Samaritan vessel had managed to get them out of the water, and we were able to treat them using our equipment and skilled volunteers, until we passed them over to the care of the ambulance service.”

He added: “This was a great example of co-operation between ourselves, the volunteer coastguard team, HM Coastguard, and North Wales Ambulance Service.

“We wish both casualties well, and hope the gentleman has a speedy recovery from his injuries.”

“I cannot imagine the nightmare he and his family have endured these past years.” North Wales Chronicle | Anglesey …

A SOCIAL enterprise based in Anglsey, Menter Môn, has been supporting communities across Gwynedd and Anglesey to improve their green spaces to benefit people and wildlife. North Wales Chronicle | Anglesey …