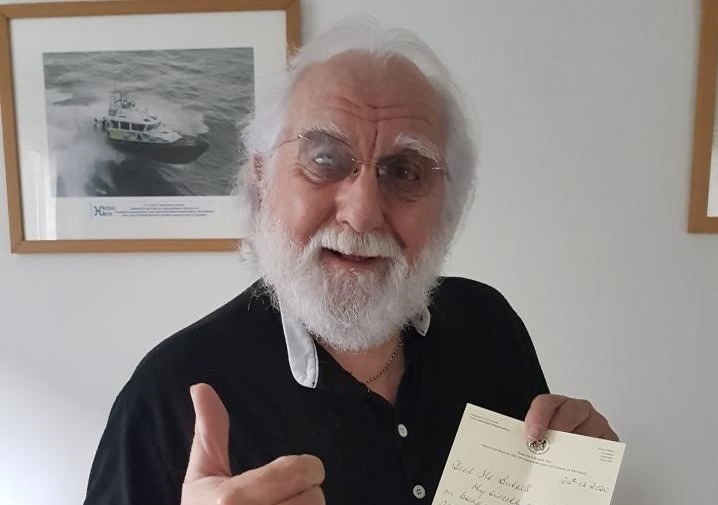 THE popular Santa Claus of Holyhead and long-term community volunteer has shared his “complete surprise” after being awarded a BEM.

Richard Burnell, 80, was named on the in the New Year Honour’s List for his services to young people and to the community in Holyhead.

He has been involved in organising youth activities at Holyhead Maritime Museum and the Port of Holyhead for more than two decades.

As a museum volunteer he visited primary schools as part of an educational programme which later involved school trips to the Port of Holyhead, where pupils had tours of the Stena Line ships and met their captains.

As director of the not-for-profit South Stack Ynys Lawd Co Ltd, he also played an instrumental role in ensuring the Holyhead lighthouse remained open to the public after the end of its lease between the Anglesey County Council and owners Trinity House.

But he is perhaps best known as the Holyhead Santa Claus for the last 20 years, donning the red suit on the Holyhead Round Table’s Christmas float and grotto.

Mr Burnell said his motivation was to inspire young people and spark their interest in their town’s history as they were the “town’s future”.

“Being notified that I had received the BEM came as a complete surprise and shock,” he said.

“I am obviously very pleased and proud to have been awarded this honour.

“With all the problems we have with this Coronavirus and the work our NHS staff are doing I would have thought that I would have been the last person to have been considered.”

“I believe I was motivated to do what I have done by the young people themselves. We found once they had been in the museum it sparked immense interest in the town’s history.

“We felt that the young people were the town’s future so by showing them and talking to them it would ensure the history of our town would continue.”

Mr Burnell also organised remembrance services for the Holyhead crewmen who died during the First World War and designed the memorial near the Maritime Museum in memory of those lost on the Leinster and the Anglia ships.

He often encouraged primary and secondary schools to get involved in Holyhead remembrance services, such as in singing choirs.

Twin trips between schools in Holyhead and Ireland were also arranged so that pupils could experience the differences of each other’s countries.

Mr Burnell was born in Birkenhead in 1940, his father an engine driver who was born in Holyhead before moving to the Wirral as part of the reserved occupation. His mother was also a Holyhead woman and the family returned to the town in 1947.

He has had several roles in local government, including an apprentice joiner for Holyhead Urban District Council in 1956 and housing foreman in 1975, before becoming a housing inspector and then housing maintenance surveyor in 1994.

Mr Burnell took early retirement in 1999 and has dedicated much of his time to volunteer work, which also includes organising the Holyhead Festival.

Speaking on his role as the town’s beloved Santa, he said: “The sobering thing is I have young mothers bringing their children these days who tell me they can remember sitting on my knee and telling me what they wanted for Christmas.

“I must say it is one of the most enjoyable things I have done over the years. This year 2020 has been particularly hard on the children, but we did manage to get around some of the schools by parking the sleigh in the playground and the children came out class by class safe distancing.

“We also managed to go around Holyhead and parts of Anglesey on a street tour. It was amazing.”