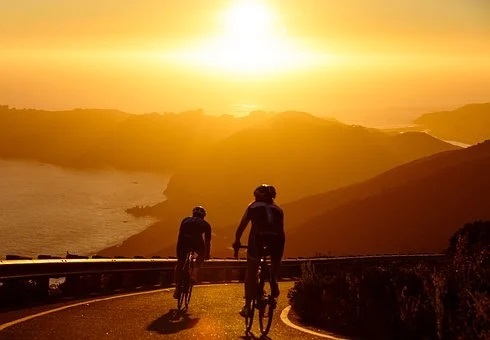 A SAFER Cycling campaign has been launched due to an increase in the number of cyclists who are now using the region’s roads.

Specialist gilets are to be given to vulnerable cyclists thanks to the latest road safety initiative by North Wales Police, the six local authorities and the Welsh Government’s Traffic Wales service.

The bright and colourful gilets will be distributed by officers from the Roads Policing Unit to cyclists who are spotted out and about wearing dark clothing.

The back of the gilets also display the 1.5 metre logo – the distance required for when passing a cyclist safely at 30mph.

The Safer Cycling campaign has been launched due to an increase in the number of cyclists who are now using the region’s roads.

Cllr Brian Jones, Denbighshire County Council’s lead member for waste, transport and the environment, said: “The Council is supporting this campaign which will make the county’s roads safer for cyclists.

“During lockdown people have been cycling more often and now the roads are getting busier, we want to ensure they are able to carry on doing so safely. These gilets, along with following simple safety advice will help keep cyclists safe on our roads and reduce accidents.

“I’d also encourage motorists to be aware of cyclists on the roads and to give them the 1.5m safe passing distance when overtaking.”

Thanks to a partnership approach North Wales Police worked closely with cycling specialists Velotec Ltd – who designed and produced a specialist product that would be used by cyclists.

Sergeant Trystan Bevan of the Roads Policing Unit said: “Since the coronavirus lockdown, we have seen an increase in the number of people using our roads for cycling. Now more than ever, we urge motorists to give cyclists, and other vulnerable road users, especially children, plenty of space.

“During the lockdown it was noted by patrolling officers that a number of cyclists were wearing dark clothing making them less visible to other road users.

“During the summer, we usually see cyclist casualties increase, but the majority of collisions are preventable. If everyone was a little more cautious and alert, slowed down and gave each other space, a lot of collisions could be avoided.”

• Give cyclists at least 1.5m when overtaking, more in poor weather or when travelling at speed

• Look over your shoulder before opening the car door, or try doing it with your left hand

• Be seen. Use reflectors and ensure your lights are working in the dark/poor weather

• When preparing to turn left at a junction, don’t travel along the left side of a lorry

• Ride on the left edge of the traffic flow – at least 0.75m away from the kerb

• Look for drivers to react to you. If you don’t see a reaction, they may not have seen you

• Overtake vehicles on the right-hand side when oncoming traffic allows